‘This was a year of consolidation for TCF, after taking over the operations of 271 Government Schools last year over just 5 months. As our school network is growing year by year, our focus remains on continuous improvement and innovation to provide the best quality education that we can to our children, and to continue uplifting the communities we operate in.’

Education is the key to eliminating gender inequality, reducing poverty and fostering peace. It is the great equalizer – a force that can overcome differences in background, culture, and privilege. It is this belief that has fuelled our team’s work and efforts throughout the past year.

Given our mission to impart quality education at TCF, we strive to equip our students with the values, knowledge and understanding necessary to be able to make informed choices for their future. This year saw a tremendous increase in the percentage of students securing A+ or A grades, which rose from 48% to 64%. The year also marked the first successful completion of ‘Principals Quality Index’ (PQI) – a standardised mechanism for assessing and improving the performance of our principals. PQI maps performance on academics, discipline, attendance and other key indicators for effective principal leadership.

In 2016, the Government of Punjab identified the worst performing 3000 schools to be handed over to private partners. These schools were selected on the basis of low enrollment, poor (under 20% results) and teacher absenteeism. We assumed the management of 271 government schools, out of which 254 were in Punjab.

Post take over, TCF put in its systems and management controls to turn the schools around. After a year, our grade 5 results have shown a 72% pass rate in the provincial board examinations.

With most of the GSP currently focused on the province of Punjab, we are now actively engaging with other provincial governments for expansion throughout Pakistan.

Initiated last year, TCF College – Qayyumabad is now in its second year of operation. Its an educational model which ensures that our students not only achieve competitive academic results in their intermediate examinations and are able to apply for admission into some of the world’s best universities, but also hone their leadership and communication skills to succeed beyond college.

In January 2017, 1500+ students from 68 TCF schools in Karachi appeared for our College entrance test. Of these, 500 students were shortlisted for a selection camp in May and 230 merit list students were finalised for the College in June, taking the overall number of enrolled students in this Pre-Engineering College to 439.

TCF launched its Alumni Development Programme (ADP) in 2014 to prepare its students for entrance examinations at leading universities of the country.

This year, through ADP, 80 students were prepared to take university entrance tests, out of which 54 students successfully got through into some of Pakistan’s top universities.

I’m also delighted to share that Aagahi, our community development adult literacy programme for women and out-of-school girls was awarded the UNESCO Confucius Prize for Literacy 2017. This year’s theme was ‘Literacy in a Digital World,’ and Aagahi was recognised on the basis of its effective use of digital tools for monitoring and evaluation of the programme.

Our commitment to quality data and constant improvement on the basis of data analysis drives us to keep investing in quality information systems.

Our ‘Business Intelligence Platform’ (BIP) system, launched last year, continues to be developed further. New financial and school performance dashboards were added this year. BIP is now being utilised by all senior management staff for performance monitoring and evaluation.

We continue to use ‘Microsoft Great Plains’ and ‘Microsoft Dynamics Constituent Relationship Management’ systems to streamline the work of our Finance, Supply Chain and Resource Mobilisation departments.

Striving for the Best – Recognition & Awards

I believe corporate awards aren’t just a pat on the back. While they definitely enhance an organisation’s reputation, they also bear witness to an organisation’s work ethic and professionalism, and help the employees take pride in their work.

Future Outlook – Brighter than Ever

Today, just over two decades since we initiated our first few schools, many of our graduates have found their way into some of the top ranked universities in Pakistan. Others are making a difference through community service and by utilising their skills in their chosen professions.

We are deeply indebted to all our donors and supporters who have believed in TCF’s cause through the years, and contributed with their time and money to help our students in their pursuits. 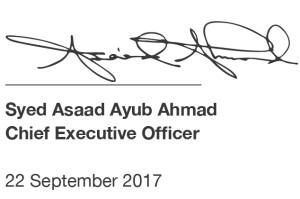